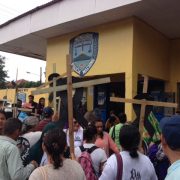 Thanks to the Mayflower Foundation, I found myself at the U.S. Embassy in Honduras on January 29, one of nine speaking on behalf of a 50-person, faith-based, emergency delegation. Five from the United Church of Christ were in the delegation including Minnesotans Rev. Don Christensen and Maryjane Westra. We were in Honduras at the invitation of Padre Melo, a Jesuit priest who has received numerous death threats in the aftermath of the stolen presidential election in November.

Tens of thousands have been in the streets since the election, including many members of churches and religious orders. More than 30 peaceful protesters have been killed by the army or national police. One of the events in which we participated was an outdoor “Stations of the Cross” organized by a local parish. One of the stations was the local headquarters of the Honduran National Police (see photo).

No one we talked to had any doubt about the U.S. government in stealing the election and fomenting violence. The U.S. government has continued to support transnational corporations’ theft of minerals, agricultural products, and hydroelectric power. We went to the embassy, accompanied by Melo, to amplify the voices of prophetic truth we heard. Our trip to the embassy was covered by the National Catholic Reporter. Read the story here.