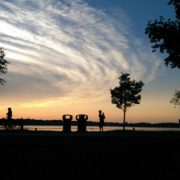 Step one is the day you check the donor box, but other steps are needed to make donation happen.

Nine hours after my husband died, I received a phone call from a man representing Lions Gift of Sight seeking my permission for them to go to the Cremation Society and recover his corneas. I had never heard of Lions Gift of Sight and in my sleep-deprived state, still in shock, I asked for the phone number and said I would call back after calling the Cremation Society to make sure this was the way things worked. My husband was an organ donor, of that I was certain. The man who called was sympathetic and sensitive.

Marc and I had both checked the donor box on our driver’s license applications years before, but neither of us ever wondered how the donation(s) are carried out. In our case, the hospice notified the coroner, who checked the Minnesota driver’s license donor list. Based on that, someone contacted medical entities. Because my husband died of cancer, his organs were not usable, but his eyes were, for transplantation or research purposes. In my role of caregiver, one final thing I could do for my dear one was to see his wish carried out by granting permission.

After confirming the legitimacy of Lions Gift of Sight, I gave my permission. After losing so much, it seemed a positive development—some good to come from what was otherwise entirely bad. Two days later, I opened a box that arrived by mail to find a leather-bound certificate of recognition for my husband’s “selfless contribution to the visually impaired and to all people whose lives are enriched by advances in the field of ophthalmology.” Documentation from the State of Minnesota was also in the box. I was impressed by how the organization so beautifully managed the experience in such an efficient timeframe.

Lions Gift of Sight is one of the oldest and largest eye banks in the world. Affiliated with the University of Minnesota, it has helped restore sight to more than 22,000 people by providing cornea tissue for transplantation. Additionally, it has provided more than 20,000 corneas or eyes for basic research to help advance vision science.

Several months after Marc’s corneas were donated, I accepted an invitation to a reception for families of eye donors, certain it would be meaningful and thoughtfully done. My children, our children, agreed to accompany me. It did not disappoint. Hundreds of people filled a large auditorium on the campus of University of St. Thomas for a beautiful service of remembrance. Lions Gift of Sight’s community liaison spoke, as did the medical director, a transplant recipient and the mother of an eye donor. A soloist played piano and sang several songs, all perfectly in tune with the event.

The heart of the program was a video presentation of pictures submitted by donor families. Many donors were pictured in true Minnesota style—in boats and on docks holding up a freshly caught fish. Others were in family groups or with a pet or engaged in a favorite pastime. Every image represented a person who had died in the previous year and donated his or her eyes. We in the room were riveted on these pictures. Emotion was palpable. “What a Wonderful World” was the final song accompanying the video.

I learned from the speakers that one could know the specific use of the donated corneas, so I contacted the eye bank and learned that both my husbands’ corneas had been transplanted, one each into two people. I was buoyed at learning this. When someone as close as a husband, child, or parent dies, much is lost, but because my husband was a donor, and because I gave permission affirming his wish, a part of him lives on in the bodies of two others, people whose lives have been substantially improved. The joy this has brought me is immeasurable. His gift (and mine) continues to play a part in the human family.