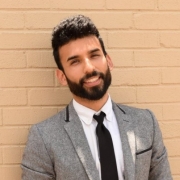 Death is the narrator in my favorite novel, The Book Thief. The setting of the novel is Nazi Germany, so the narrator is exhausted with all he has to do.

In the novel, Death never causes anything to happen, it’s simply his job to whisk people away when they have reached the end of their life. Reflecting on the story, I have sympathy for death. I desperately want rest for him.

In the Gospels we find the story of Jesus’ death. Jesus was murdered at the hands of the empire. In our present-day context, it is empire that kills us, too. Its horrendous obsession with war, its sick policies and its death-dealing practices towards undocumented people and indigenous communities, and its apathy towards the well-being of the earth—the empire is killing us.

But there are other things that kill us, too.

The 19th century French poet Stéphane Mallarmé once wrote:
No more life for
Me
And I feel
I am lying in the grave
Beside you.

The death of a loved one kills us. Depression, anxiety and loneliness kill us, a life-altering health complication can kill us, a divorce can kill us.

Over the course of our lives, we die many times. Some of us, many more times and more gravely than others.

That’s what resurrection is about. When empire does its worst, it kills us.

And we still rise. To resist it. And just as importantly, like the women at the tomb we run to proclaim the good news to others that death is not victorious. Death doesn’t have the final word. The tomb is empty. Jesus is not there.

The final words from Death to the reader in The Book Thief are: “I am haunted by humans.”