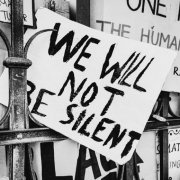 In a favorite videogame of mine Bioshock Infinite, you realize your playthrough is a scenario in your own life that has played out over and over and over again. You’re stuck in a loop of time; you’re trapped in history.

The late writer and activist James Baldwin once wrote, “People are trapped in history and history is trapped in them.”

Despite how we play, America is stuck in its white supremacy. This past month I didn’t flinch when I first heard that white supremacist terrorists stormed the capitol at the incite of our former president. I was shook but not surprised. Disappointed, but this was very much within the confines of my imagination.

White supremacy is a foundation upon which this country was built. Despite the belief that “this is not who we are,” white supremacy is simply a part of this country’s DNA. White supremacy is an idol. A demonic idol that seeks to normalize itself, while framing its downfall as an absurdity. Many people find the idea of the land back movement to be farfetched and outrageous; however, the taking of the land of present day Indigenous tribes (as the struggle in Pallisade over Line 3 is showing) doesn’t seem to evoke that level of outrage. I confess this is true even within myself. Because I, too, am possessed by the demon of white supremacy.

I have yet to find a poet, writer, preacher or scholar that has articulated how deeply I hate white supremacy.

I’m not partisan in my call to a more just, compassionate, and loving world. My hope for all of us as people of faith moving forward in this next chapter of our country’s story is that we are just quick to call out the injustices this administration is responsible for as we were for our previous administration. My hope is that we not be fooled by the optics of inclusion, or a more diverse team. More diversity in the authorship of oppressive policies is not liberation. The alleviation of suffering, the flourishing of people on the underside of oppressive systems, is liberation.

At the end of Bioshock Infinite, by the time you realize you’re stuck in a time loop, you attempt to go back and try to fix your wrongs. Because for the character in the game, his present-day wounds are caused by the past. There is simply no moving forward, no exit from the time loop without making the things in the past right. No healing without reckoning. No reconciliation without justice.

The words from Amanda Gorman’s poem that she delivered at the inauguration that resonated the most with me were: “It’s the past we step into and how we repair it.” That is the challenge we have moving forward. From our neighborhoods to the very land our houses are on—to how we’ll advocate for structural changes in our communities, in our workplaces, our house of worship; how we’ll leave our society better than we found it to ensure the generation behind us isn’t stuck in the same time loop we have been.

It will be a difficult task to take on, most certainly not one for the faint of heart, but with a bold faith that leads us to bold action. With the help of God, maybe, just maybe, we can break out of our history.

The Artists of Mayflower
Scroll to top