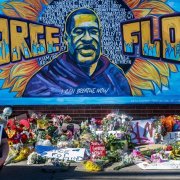 [On April 20, 2021, the historic and globally anticipated verdict of former Minneapolis police officer Derek Chauvin was announced: guilty on all three charges. Hundreds, maybe thousands of people, gathered on the corner of 38th and Chicago—the corner where George Floyd was lynched, the corner now known as George Floyd Square—to rejoice and be reminded of all the work there was left to do. Rev. Christian was one of nine clergy who were asked and accepted to speak on the day of the verdict. At the time the speech was delivered, military vehicles and armed military members were stationed all around the cities of Minneapolis and St. Paul. Below is the manuscript to Rev. Christian’s speech]

I don’t know about you all, but I wasn’t holding my breath for justice to be delivered. Anybody else feel me on this? This country has a rap sheet, and I was preparing my spirit for the worst.

I’ve not been able to stop thinking about what the writer and activist James Baldwin wrote: “We are trapped in history, and history is trapped in us.”

We’re gathered because we demanded justice for George Floyd, and what did we get?!

And along with that we remember George Floyd comes from a tragically long line of names rooted in a deep history of racist policing where Black and brown people routinely have had the life snuffed out of them.

I come from a religious tradition in which our savior, Jesus of Nazareth—the one who we look to what it means to embody love, compassion, and justice—eventually found himself at odds with the state. Because sometimes the law of God, the ways of compassion, love, decency and justice, run contrary to the ways the rulers, authorities, judges and police choose to rule.

The state had Jesus unjustly tried and executed. Jesus was lynched. A story all too common for our Black neighbors.

The day after this news began to spread, I heard we were under a state of emergency. My initial thought was “yes, of course, finally a state of emergency is declared was for the way Black and brown people are mistreated, terrorized and killed by police.” But I should’ve known better.

State of emergency meaning more police presence, a militarized occupation of our city. We can’t rely upon more of what killed us to create peace. We cry out we can’t breathe, and we get hit with tear gas. That don’t make no sense.

We are gathered here to rejoice but also to remember that we still have work to do.

The poet Danez Smith writes: each night, i count my brothers. & in the morning, when some do not survive to be counted, i count the holes they leave. i reach for black folks & touch only air.

And I can’t help but be reminded of Adam Toledo the 13-year-old Latino who reached into the air with empty hands and was still gunned down by a Chicago police officer.

On the Christian calendar we are in the season of Easter when we proclaim the resurrected Christ. In the context of a Roman crucifixion, the cross was a deliberate message to the people — reminding everyone what happens when you mess with this empire. It was the absolute worst the empire had.

What we proclaim when we say ‘Christ is risen’ is a proclamation that the empire’s worst in all its military might, in all in all of its violence, racism, all, all of its tear gas, and tanks, less than lethal ammunition, every bit of it of is not enough to hold down the power of the people, the power of God, that lives in each of us. The spirit that is within us that says this death will not have the final word. The spirit within us that watches our brother George Floyd get the life snuffed out of him and says this is going to stop.

I hope that after today you will drink water, and rest your head, and find something that brings you joy, that fills your heart that makes you laugh and smile.

Today is evidence that when we rise up together. All of us, regardless of where we come from, all the melanin in our skin in or lack thereof cuz some of y’all white people daaaannng *crowd laughs*

When we rise up together justice can and will be served. Our work here is far from over, but justice and joy are yours, all of ours to have.

Check out the Annual Report
Scroll to top