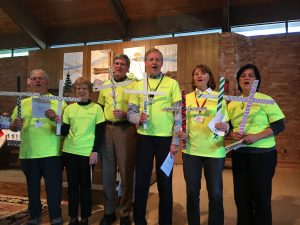 Several Mayflower members traveled to the U.S.-Mexico border (Nogales, Arizona/Sonora, Mexico) in November 2017 to protest the continuation of WHINSEC, formerly known as the School of the Americas (SOA). For decades the SOA has trained soldiers from Latin America to return to their countries and kill those who posed a threat to their governments (priests, lay church leaders, students, union organizers, etc). As a result of the horrific killings of mostly indigenous people in Latin America during the 70s-90s, people have risen up to demand that the SOA be closed. Mayflower will stand in solidarity with people from throughout the Americas who believe that the SOA should be shut down. 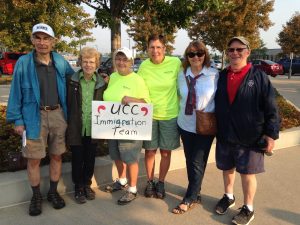 The Mayflower Immigration Team addresses issues about the treatment of immigrants and the lack of progress on the part of Congress and President Obama. The group has led delegations to the border and frequently hosts events to advance discussions on the topic of immigration.

At the annual meeting on May 18, 2016, Mayflower members voted to join with UCC churches across the country and be designated an “Immigrant Welcoming Congregation.” The designation proclaims to immigrants and the community that Mayflower supports brothers and sisters from other countries, documented or not, and happily welcomes them into our church should they chose to come, but, more importantly, as welcome participants in our community.